|In Headlines, Competition
|By wangzhiyao
×Scan to share with WeChat 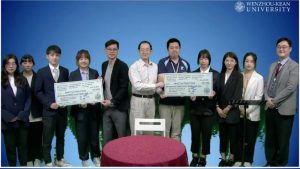 Dr. Jerry Choi from Social Enterprise and Charity Research Center (CSEC) and Social Media Lab introduces the background of this event. It’s known that WKU Student Career Development supports student’s participation in innovation and entrepreneurship development and WKU Foundation supports WKUers to have interests and take action of social enterprises on campus. They both would like to provide a necessary resource for making several Video contents for the “Small Tree Project Team”.

Small Tree Project is developed in the beginning of 2020. It has been devoted to providing high quality, low price online K12 course for the students who are desire to have international education, but cannot afford the expensive one-to-one course fees. According to the briefly introduction from team leader Qian Jiayin.

Fortunately, the CBPM Social Media Lab is operational from November 2019. As a professional studio equipped with sufficient facilities including three main cameras, five microphones, Chroma key screens, A/V converter and two large LCD screens, the Lab is a perfect platform to create quality videos and contents. The expenses of the Lab is “50 RMB for 30 minutes”. And all monetary gains go to a Public Fund that is coordinated by WKU Foundation and CSEC.

Followings are the speeches from enablers of this event. CBPM Dean, Dr. Cao Jiang expresses his thanks to Dr. Jerry and colleagues from Dean’s office. He says that using 10 hours dedicated to the small tree project is meaningful and impactful. Mr. Wei from Student Career Center introduces the establishment background of the Small Tree Project, tells that the inspiration of this project comes from the Khan Academy in the United States, and emphasizes that we should never forget to help the people in need. Later, Mr. Meng from WKU Foundation, shows that the Foundation will always be students’ backside, supporting their entrepreneurship projects. 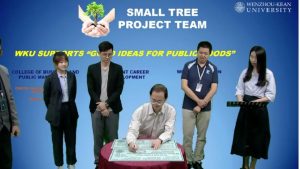 Then comes the signing ceremony. Dr. Cao Jiang, Mr. Wei and Mr. Meng sign on the donating board. This Signing and Donating Ceremony is indeed an encouragement for Small Tree Project and whole WKU Campus Social Enterprise.